Cue the musical theme from The Good, The Bad and The Ugly

More time with the Stars Hollow bunch, a cat’s funeral and the preludes to two new romantic subplots.

END_OF_DOCUMENT_TOKEN_TO_BE_REPLACED 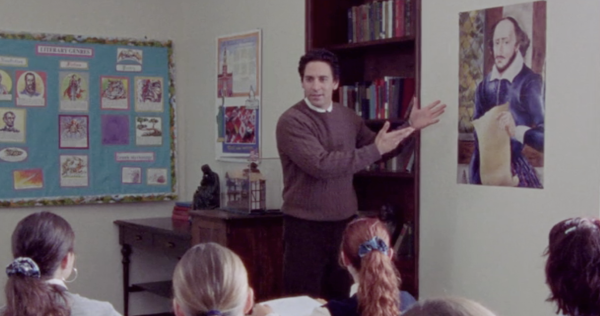 A parent-teacher conference, romantic sparks, a healthy dose of Shakespeare, two meltdowns, and a whole lot of risotto.

END_OF_DOCUMENT_TOKEN_TO_BE_REPLACED 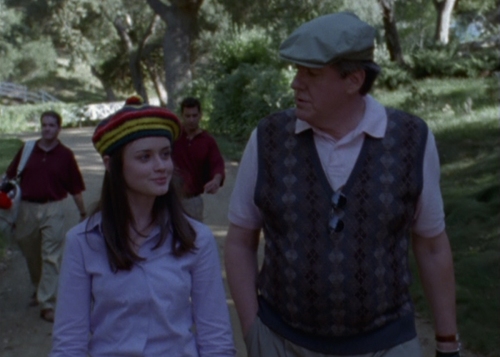 “Have you ever been to Fez?”

END_OF_DOCUMENT_TOKEN_TO_BE_REPLACED

I did not realize this until I researched the production details of this episode, but director Arlene Sanford directed three episodes of Nashville, an episode of Friends, and, to my great surprise, nineteen of twenty episodes of little known show The Torkelsons, which I adored as a teenager.  The Torkelsons was very successful at creating a believable warmth by way of an unquestionable sense of home and family, which lends itself naturally to the likes of Gilmore Girls.

END_OF_DOCUMENT_TOKEN_TO_BE_REPLACED

One of the highlights of my young life came in the summer of 2008, when I was working in Marina del Rey, CA and, on my day off, drove to Burbank and took the Warner Brothers VIP Tour.  I wore my ‘Luke’s Diner’ t-shirt, which I still have today.  Needless to say, I’m rather a big fan of Gilmore Girls.  Unlike many of the other fandoms to which I belong, however, there’s something a trifle mysterious and – dare I say – even out of place with this show.  Most of my other escapes are to faraway worlds with the flair of the fantastical; Hogwarts, Gotham City, Pern, Middle Earth, Dragaera, Gallifrey, and so on.  These universes, and the stories that take place within them, have all been well traversed, speaking to me on many different levels.  From adolescence and early adulthood, they have proved to be the tools that would shed light on my innermost identity, shape who I am as a writer/filmmaker/creative and continue to help me understand and trust myself during my darkest hours.   Gilmore Girls was no less instrumental in this process, but I still find myself at a bit of loss to explain why.  To start with, fantasy worlds provide built-in escapism, but Gilmore Girls is a real-world sentimental drama series.  Harry Potter (along with several of the others) place heavy emphasis on what it means to be powerful; Hogwarts has been the place where I go to remember my inner strength and find adventure.

So what drew me – and kept me attached – to Gilmore Girls?

END_OF_DOCUMENT_TOKEN_TO_BE_REPLACED 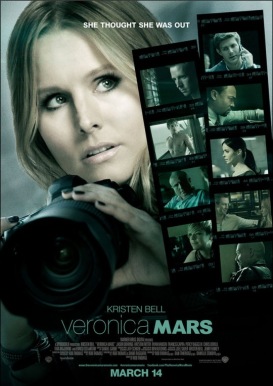 I have been a fan of Veronica Mars since 2006, when it moved from UPN to the CW to launch its third season.  I’d noticed the occasional TV ad for it and became genuinely intrigued by the concept of a snarky, female Private Eye, balancing espionage and freshman year of college.  Veronica struck me as a capable protagonist, sturdy in her lead role and fit to carry a show.  I was still settling into my junior year of college at the time, so I was slightly distracted, but I made time for TV that Tuesday night and when Kristen Bell’s voice kicked in with her opening narration, I stuck around.

Here it is: first day of college.  What do you say, Veronica? New school, fresh start…how about you try not to piss anyone off this time around?

I wouldn’t say it was love at first sight, but I watched the whole season and when it ended, I realized that somewhere along the line, I became hooked and felt the stirrings of fan-outrage over its cancellation.  The biggest disappointment was that the network left the story open-ended and inconclusive, characters and their arcs floating around in limbo.  One could argue that it gave the audience the chance to interpret the ending upon personal preference, but that was not likely the series’ intention.  And it showed. 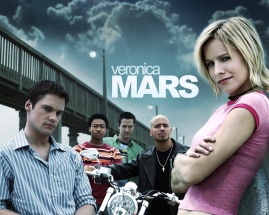 To calm the growing sense of withdrawal, I rented the first two seasons.  Imagine my astonishment at how much more there was to Veronica’s story; how much better those first two seasons were. Baffled, I couldn’t understand why the show had not gained more attention from the start.  And even season three –– while sub-par compared to its two predecessors –– suffered poor ratings largely due to its Tuesday night time slot, airing against American Idol and House.   This was 2006, when House was one of the hottest shows on all of television, following Idol, which had not yet grown to be old news.

I’ve remained a fan in the intermediate years, with the help of reruns on various networks, but I felt very much like I was part of a small group; none of my friends had even watched the series, there wasn’t a lot of buzz online, and I couldn’t find reruns anywhere.  I eventually purchased the series on DVD and heard the rumors about a feature film, but I didn’t expect to see it happen.

Yet here we are, in 2014, eighteen days and counting until the feature film is released to the public; a film that got made by cracking every Kickstarter record on the books.  The phrase, “look out, Veronica Mars!” is cropping up on fundraising campaigns all over the place now.  The fanbase got the film made and everyone, including Rob Thomas, Kristen Bell and all the cast and crew are gobsmacked that there was a response so large.

And why?  What makes Veronica Mars worth +$5.7 million?  What is making 270 theaters release the film on the same day that it will be available to buy or rent online?

Is it the story?  The series launches with the introduction of one sixteen-year-old Veronica, daughter of Keith Mars, Sheriff of Neptune, California until the murder of Veronica’s best friend Lily Kane changes everything.  Keith wrongfully accuses Lily’s father of the murder and doing so leads him to lose his job and become the town pariah and Veronica, the school outcast.  Veronica’s mother walks out on the family, leaving Keith to reinvent himself as a Private Detective and Veronica to hold her head high among her classmates.  She goes to the end of the school-year party to prove that she is unaffected by her peers’ treatment…but she wakes up the next morning to realize that she has been drugged and raped.

And that’s just the pilot.

An overly dramatic premise?  Undeniably.  But it’s the smarts of how the story was presented that makes it work.  Flashback is used to great effect, without being overdone and while there is a lot of exposition conveyed in the show, there could have been considerably more, but the writing expects its audience to be sharp enough to keep up and willing to play along, to accept the modern, noir-like tone.  The focus of the pilot and the season at large, really, is centered on the relationships and characters.  The story does dwell on the past, but always in a way that is relevant to the present; how they’ve dealt with the upheaval around them and the new patterns that they have formed in the disaster’s wake.  Most significant here, is the long-established relationship between Veronica and Keith.  Through it all, they have remained very close; Veronica has become his protege and they will protect one another, whatever the cost.  Simultaneously, the new friendship Veronica forms with Wallace Fennel in the first few episodes becomes another anchor point of the series; soon, Wallace is her best friend and closest ally, through thick and thin.

Veronica herself is a firecracker, but she is also a teenager and the series never forgets that; nor does it beat the audience over the head with reminders, either.  Veronica, too, is a great modern-day heroine.  She’s sassy, tough and almost always able to hold her own against her many foes.  At the same time, she wrestles with serious character flaws.  She’s vindictive, headstrong and manipulative, and the people around often struggle to keep her in check.

When arguments happen, when lines are crossed, problems don’t just vanish into the mysterious void between episodes.  Stories are entwined and while, yes, it does have the structure of episodic television –– including the one, big case per season –– it is, after all, a mystery show with a contemporary Nancy Drew at the center.  In fact, it’s my personal opinion that Veronica may be the closest thing we have ever see to a female interpretation of Arthur Conan Doyle’s famous sleuth; Wallace and Mac are, in essence, two variations on Dr. Watson to Veronica’s Holmes (and, for the record, I’d love to be wrong about that and see a female Holmes someday).

“Respect the business model, Veronica. I do the gadgets. You do the actual espionage.”(Mac, Nevermind The Buttocks)

Veronica even slips into the cold-hearted aspects of Holmes’ personality upon occasion, with Wallace or Keith being the ones to pull her back to reality.  She often takes them for granted and, more than once, they call her on that.

“You been paying any attention lately? I just learned my whole life is a lie… I’ve always been a shoulder you could lean on. You’ve given me no time, no sympathy.  Nothing.”
(Wallace, Blast From The Past)

I could, very easily, go further about why I admire the series, expand on its uniqueness and –– eventually –– sum up to a simple explanation of “it’s just cool!” but the significance of this film is far bigger than the series itself, or even the cinematic continuation of it.  This whole endeavor is the latest mile-marker on the digital frontier; never before has a US Hollywood Studio released a film in theaters and at home at the same time.  It’s entirely possible that this will not be the last project to be produced and released in this way; but, again, apart from the simple fact that the show deserves this big break, why is Warner Bro.s willing to take the risk?  How was such an achievement even possible?

Because it was possible; the reality is that the goal of Veronica Mars was actually within reach.  Even at $2 million, the film could have gotten made.  Sure, the extra $2+ million helped, but because of the setting, genre, time frame and the enthusiasm of those behind the project, it was 100% do-able.  The fans out there scrambling for other beloved shows to get picked up again, but for them, a budget this size is just not realistic.  Veronica, however, was within the realm of possibility and, rather than sit by, Rob Thomas and his team took a chance and it paid off.  The time was right and this could, quite literally, be the starting point of a new branch of film and funding.

And still, in spite of my saying all that, I can’t help myself from adding that there really is something special about Veronica Mars.  It doesn’t overreach and it doesn’t try to over- or under-estimate itself.  It was “simple” done right.  Veronica’s Neptune was a world I so enjoyed getting to know, as enthralling for me as Hogwarts or Gotham City.  The film’s existence and upcoming release is a well-deserved accomplishment for the creative team.  Whatever the outcome of the film’s quality, whether it warrants an Oscar or a Razzie, it got made and has changed the way the industry views crowdfunding.  It’s one for the history books: Rob Thomas didn’t give up on his characters, the cast got behind it and the fandom spoke.

“We did it, Marshmallows!”

Veronica Mars, opens in the US on March 14th in select theaters.

“It starts with one. Will you join us?”
Genre Wars: Resistance Rising
Genre Wars on Facebook!

And check out the First Look at Genre Wars: Resistance Rising!

Hogarth Hughes from The Iron Giant by unusualsidekick.