A few days have passed since the heavy-hitting season premiere of Young Justice: Invasion.  I, like so many other YJ fans, reacted strongly and emotionally to Happy New Year, and I was ready to dash into the blogosphere and spew my feelings and position on both how the episode had opened and presented itself singularly, as well as my concerns, hopes and questions about the future for the series.  I waited, though, because, at the same time, I was numb from those drastic and radical changes from last season. 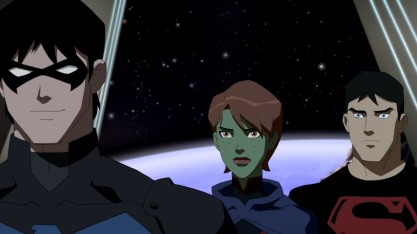 I processed what I’d seen for a day, then proceeded to investigate the forums and blogs, not for my own review, but to see what others were saying—day-to-day fans, both those who know the comics and those who do not, as well as critics, particularly the folks at IGN.com.  After reading, listening and watching a great many responses, it appears to me that audiences are almost completely split, and there’s not much gray area between the two camps…

On one side, the consensus seems to be positive, that while the five-year flash-forward was abrupt and unexpected, it was a pleasant surprise. It was great to see the new characters and to see Dick Grayson secure in his new role as Nightwing.  We’re left with some questions and loose ends, but overall a good, interesting start to season two.

On the other side, the rest of the fans are distraught…“heavy on the dis.”  In that camp, the missing five years left the audience wanting, with too much left out; the missing characters’ absences are glaring and problematic, and the onslaught of new characters felt erratic, haphazard and overwhelming, with a distinct lack of the development that season one had in spades from the start.

For my part, I still side with the latter.  I wanted, so badly, to come to a different conclusion after I heard opposing opinions, got explanations and DC Comics history, and took in what it was that fans enjoyed in this episode.  I wanted to lessen the disappointment I still feel.

While I no longer outwardly detest the choices and changes that have taken place, have come to respect them from a distance, I still don’t favor them.  I did enjoy seeing Beast Boy, Tim Drake’s Robin is pleasant addition, Blue Beetle managed to stand out among the horde of new characters…and various other bits of the show were enjoyable, but it doesn’t begin to compare to “Independence Day” and “Fireworks.”  I doubt that the show will ever be as good as it was before.

Simply put, I feel that this leap ahead was done too soon, and too much time was skipped over.  Too expand that point, it’s not what happened in the episode that bothers me: it’s what we’ve missed by skipping those five years.  I don’t know if I’m alone, but seeing Dick suddenly appear as Nightwing was like a slap in the face.  It was great to see Nightwing, don’t get me wrong, but I felt as though that not seeing that transition from the 13-year-old Boy Wonder into the grown-up Dick-Grayson-Nightwing was unfair and cruel.  There is so much in those five years to tell, and we’ve completely missed it. 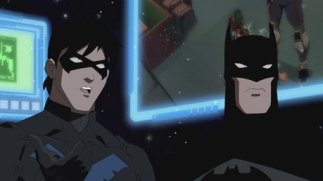 The common response to a critique like that – as, I know, I am most definitely not the first to point this out – has often been, “jeez, relax, it’s episode one, they’ll go back and fill in the blanks.  They have to, right?”

Maybe.  Maybe not.  Based on what I’ve read, it sounds as though this is no temporary situation; the plan seems to be to stick with this premise and this context for a good long while.  According to Greg Weisman and Brandon Vietti, the dynamic of the show has shifted; the focus of the relationships is no longer mentor-to-student but seniors-to-freshman, within the “young justice league” itself, which strongly indicates that the show we had for all of season one is gone entirely.  Even with flashbacks and memories, it will never be the same again.  And, in fact, it appears that the outline for season two is absolutely jam-packed and hefty with plot, rather than the character-driven style of season one.  Again, from what I’ve heard, the “Invasion” comic series presents a dark future for the characters we have come to know and love.  Young Justice has lightened many of the darker elements of the comics, but, so far, they’ve suited the stories that are being told in their own right, which leads me to point out yet another grievance.  Season one had a massive appeal to both comic-lovers and total outsiders, like myself.  The show seemed to find a nice middle-ground between authenticity to its source material and originality for the new viewer.  The stories were strong, character development was key.  Like with Weisman’s show, Gargoyles, there was a strong sense of community among the group, which walked the line of their being kids and, simultaneously, crime-fighting superheroes-in-training; the realistic vs. the fantastic.  Invasion, however, goes in the completely opposite direction.  Unless you know the comics and appreciate how much homage is being paid to often-ignored characters, or details of the comic-lore, then most of this episode went right over our heads, which is not something we’re used to.  We are used to being able to sink into the world comfortably—maybe having a question or two here and there, but not ones that so disrupt the flow of the episode or affect, badly, your watching experience.  Regardless of where the show might be headed or what might be explained in subsequent episodes, nothing changes the fact that this opening statement was one-sided in favor of the comic aficionados and that seriously hurt the show’s appeal.

When I first viewed this episode, I was so distracted by my confusion and upset that I found it difficult to concentrate on the actual story.  Not that there was much to concentrate on; I agree with the fans that thought it was too much at one time.  Not only are the familiar faces missing or drastically altered in their presentation, but we have dozens of new ones thrown at us, some of which for mere two- or three-second appearances.  And to what purpose?  Just to please the avid comic fans?  I read in one of the IGN articles that, towards the beginning of the show’s production, both DC and Cartoon Network studio heads told the creators that they could only use or reference a very, very small margin of characters.  While this limited them in what they could do, I think the ending result benefitted everyone; much the way that George Lucas’ being limited to invent the effects for Star Wars without fancy computer-generated technology, which led to the classic film trilogy and a style that really hadn’t been seen up to that point.  However, when it came time for season two, the execs all gave the creators permission to do what they wanted and, like Lucas with the Star Wars prequel trilogy, it changed everything.  Hence the blitz of new characters; so many new faces that we can’t even see straight sometimes.  I think the forced restraint of season one was a blessing in disguise.  I realize that by now they must be tired and eager to do more, bring in more characters and more heavy plotlines, but I think they went just a tad overboard.

We’ll find out where Wally is.  Where Aqualad is.  Where Artemis is.  Where Red Arrow is.  We’ll hear more about Dick’s transition into Nightwing.  The missing block of time.  Sure.  What we won’t get, though, is the same team, the same structure or framework that we had before and, in that, there has been something lost that we can’t get back.  Barring some kind of all-powerful reset button—which, even if used, most likely won’t show up until halfway through the season at the earliest—then the way the story was told for all of the first season will never be seen again.  That team no longer exists and to completely uproot the audience from it in one, fell, 22-minute swoop seems cruel.  In many ways it feels like a betrayal.  I loved season one.  It makes me very sad to think that it’s probably gone. 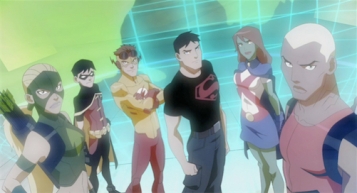 This doesn’t mean I’m done with the show.  I still plan to watch it, but only in the hopes that it gets better from here.  I wasn’t especially thrilled with the new format in its own right.  Watching it a second time, I found that there was very little of it that seemed to have any longevity.  Most of the characters and elements of story seemed to be presented at face-value, shallow and temporary.  Will the show stay like this or improve?  I guess we’ll just have to watch and find out.

My review on Tumblr