Young Justice is back and with a title like “Satisfaction,” hopes were high that they’d deliver and they did.  Unlike “Happy New Year,” the episode gets right down to business.  We are dropped into the scene without any smoke and mirrors or confusing new stuff thrown at the screen to throw us off.  Instead, we get answers.  After what feels like eons, we get face time with Original Roy and the Arrows, “Green and Red,” in a scene that packs an understated wallop.  It feels like a throwback to season one; the focus is more on character development and story, with the action and fight scenes included to highlight those points rather than take precedence. 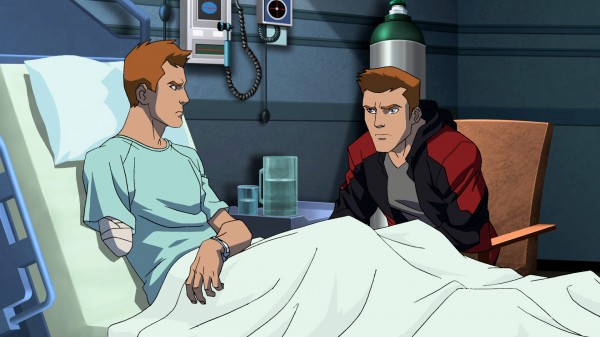 On the whole, I was very pleased with this episode.  The second half of the last season/season one of Invasion seemed to find its feet and get the show back on track after a very rocky start and “Satisfaction” proceeded in much the same way; I’d even go so far as to say that it made a successful leap forward and the show is moving along nicely.  I’m still mourning the loss of the five years, but I found that I wasn’t distracted by that thought while watching the show this time and that’s a nice change of pace.

The themes of the episode were fantastic.  I really enjoyed watching the show explore the mentor-protege relationship, and the many variations such a bond can have; the influences and the bonds between them, or lack thereof.  A lot of character development here, which is something “Happy New Year” sorely lacked.  Red Arrow and Ollie, Speedy and Ollie, Ollie’s own reference to Artemis and his feelings of regret and guilt regarding all that’s happened.  That all seemed very real, and I liked that. 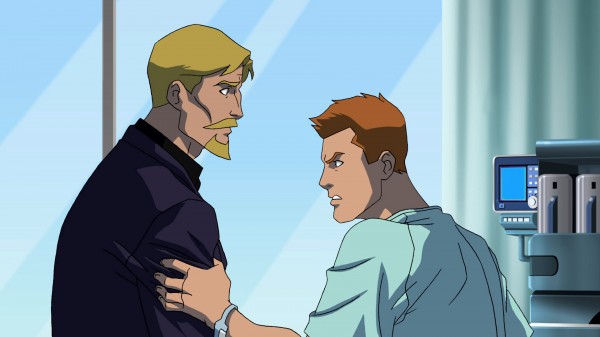 Not to mention the interaction between Blue Beetle and Impulse.  I like how their friendship is starting and how Bart actually relates to Jamie way more than anyone – especially Jamie – realizes, due to his never knowing Flash before the time-travel.  A nice poetic note that Jamie’s point still stands though; Bart does know Flash now, while Jamie, himself, is still alone.  I look forward to seeing more of their friendship develop and play out.  Jade and Sportsmaster’s conversation was, too, interesting.  He, Mr. Crock, still comes off a little two-dimensional to me, but I was impressed with Jade’s reaction; not so much her “I will avenge my sister’s death” bit, but seeing her shed all her layers of indifference, which we started to see with her interaction with Red Arrow, but here we got to see her show some of her true feelings about her father, and made it clear that they’re not exactly on the best of terms, even though they’re working together.  I wonder how much of that was motherhood (prior to and then coupled with her sister’s death)? 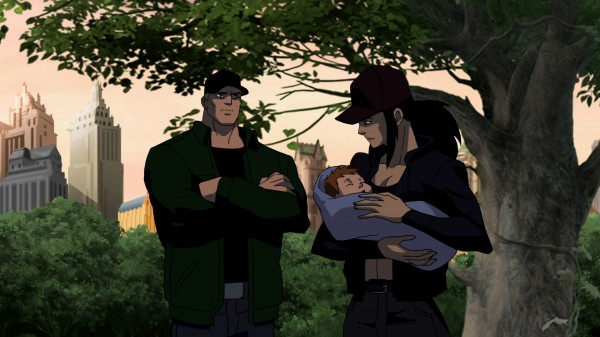 One thing I kept thinking during the episode was that I feel pretty bad for Aqualad right now, since everyone seems hell-bent on spilling his guts.  It certainly says how much Artemis was valued.  But also, more than that, I think it says how betrayed they all felt by his actions; my guess is that, like the original team, they all probably thought there was still hope for him, that he wasn’t truly a baddie, but now that he’s “killed” Artemis, they think that he’s not coming back, that he’s really lost and has to pay. Wow.  Deep, YJ. 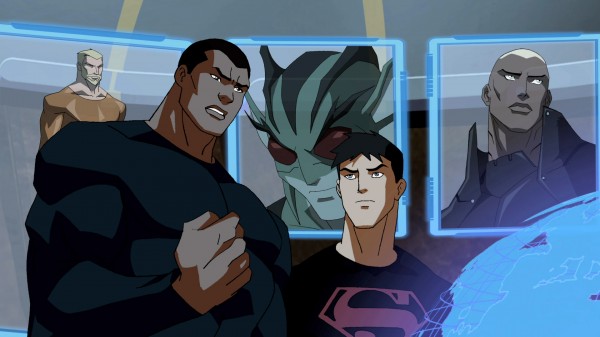 I gotta say though, the thought of a fight between Cheshire and Aqualad is really enticing.  As I’ve made clear, I’m not usually one who looks forward to the action scenes of this show, but for some reason this idea really struck me.  I hope we get to see that fight eventually, in spite of everything that’s really going on.

Some other details I noticed about this episode:

“We try not to call ourselves sidekicks.”  Very nice.  Not just because it was a cute reference to previous memorable moments in the show (which, lets face it, every fan was cheering after hearing Red Arrow say that), but also because it shows the evolution of his character, and how he’s somewhat sensitive to the situation at hand.  That the anger he is so quick to jump to has ebbed a little.  And this shows in the subsequent scenes – hell, the rest of the episode – as well.  I like that. In fact, I like Red Arrow a lot more now.  Furthermore, I liked that it demonstrated that that sentiment wasn’t completely fabricated by his “clone programming.”  The mission he was given as the mole just amplified a feeling he already had and would probably have manifested at some point all on its own.  But perhaps not quite so vehemently.

And in that same vein, I like that there is a consistency between the Roys; that the “angry” tendencies are cohesive between them, that it’s not just a Red Arrow/mole-driven thing, while that the original Roy was mild-mannered, calm, cool and collected.  It’s who Roy Harper is. 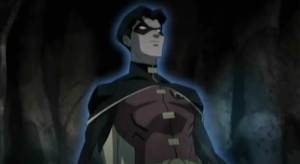 In EITHER event, though, it’s such a great thing to see the nod to the second Robin.  Way to go!

I really like that Impulse is becoming a consistent presence.  It’s a nice, smooth replacement for Wally from season one.  I know Wally’s around again, but he’s a very different guy now (not that I’m complaining about that development), and Impulse’s attitude, behavior and interaction with the other characters feels like a throwback to the original team, more so than a lot of other things we’ve seen so far, including the characters from that first team themselves, like Nightwing.  It’s just…different now and I’m still really feeling those differences.  So, again, Impulse’s being there feels familiar and almost nostalgic even though, at the same time, he’s really quite different from both versions of Wally West. And so much the better!

Small thing, but I would have liked to hear Nightwing and Wally speak.  They were there, but I look forward to spending more time with them in future episodes.  In spite of how much I am enjoying the show again, with the – as far as I’m concerned – still-new kids on the black, I miss them, the old gang.

Speedy’s sarcastic comment about Red Arrow being an “original name” was actually quite amusing to me, especially after YJ’s own acknowledgement that “Speedy” seemed odd for Green Arrow’s sidekick.

And lastly, I’m intrigued by the introduction of Wendy. 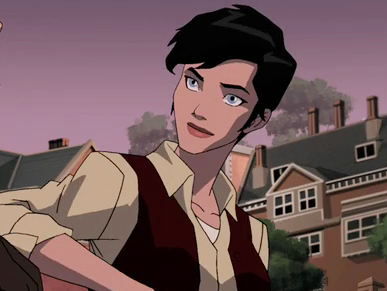 I’m never sure where I stand on the Supermartian ship, but I was surprised at how much I liked the scene between Connor and Wendy.  It felt very organic and realistic and I’m hoping to see more of that relationship develop, whatever direction it takes.  Plus, it was one of my favorite new-character-appearances of the entire show.  It was understated and simple, as opposed to so many of the others, which were practically thrown against our TV screens in most cases.   So I’m impressed with that.

On the other hand, WOW, M’gann seems SUPER concerned about La’gaan.

I almost feel like they’re not even trying to maintain her relationship with him and at this point I wonder if he is almost dead weight to the story now.  Reminds me of “Back to the Future,” in that they hadn’t planned to do a sequel, but when it came time to make one, they regretted having Jennifer be in the car as well, because it made writing another installment that much more difficult.

La’gaan’s being held prisoner is clearly part of the overall story arc and will be significant in future episodes; but that’s him independently and not connected to M’gann.  I suppose we’ll just have to wait and see.

1. In watching this episode it suddenly dawned on me: why haven’t Red Arrow and Connor been spending more time together?  I realize they’re both sort of loners but at the same time, they also are both, inside, really hurting and dealing with a lot of the same issues.  They’re both clones and are both struggling with the question of whether they are anything more than an insufficient copy of their source material.  Connor’s gotten beyond that a bit, as we saw last season with his interaction with Clark/Superman.  But I think that there could definitely be some interesting scenes between them and that they would make really good friends.  Am I alone in thinking this?  Or am I really behind to getting to this thought?

2. What is Lex Luthor up to?  His game plan with Connor and the shields revealed to be an elaborate scheme; will this be something similar, with his giving the replicated arm to Speedy?

3. For any Gargoyles fans out there, like me, am I the only one who thought that Luthor bore a VERY close resemblance to one David Xanatos in this episode?  And, additionally, that Speedy’s transition into Arsenal seems a bit similar to Demona’s fall from grace?

4. Since we got to see the small reference to Jason Todd, does this mean we might see a reference to “the Red Hood” at some point in the future?  Please?

5. OMFG, Cartoon Network’s graphics.  Can we PLEASE get new graphics for the commercial breaks?  They’ve had almost a year; two seasons’ worth of of time to make new ones that aren’t just screencaps and stills from the first season.  It’s a cruel reminder of the first season for those of us sorely missing that team.  So, seriously, why haven’t they updated their graphics???

In conclusion, “Satisfaction” absolutely satisfied and provided an excellent start to…season three?  Season two of Invasion?  Part two of season one of Invasion?  Whatever; this next batch of episodes.

I’m ecstatic that the show is back and eagerly await the next installment.