A parent-teacher conference, romantic sparks, a healthy dose of Shakespeare, two meltdowns, and a whole lot of risotto.

In the opening bumper, Lorelai and Rory shop for school supplies.  The scene always seemed like arbitrarily chipper backdrop stuff in previews viewings to me, but in this re-watch it suddenly jumped out as a demonstration of Lorelai’s support, however colorful of Rory and her academic pursuit.  When she later comments, “I’ve always wanted her to go [to Harvard],” to teacher Max Medina (Scott Cohen) it’s a little jarring and out of place.  I don’t entirely accept it as much as I do this active demonstration. 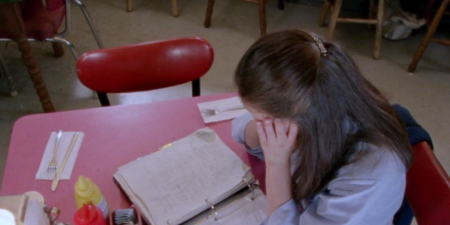 The rest of the episode proceeds around Rory, still struggling at Chilton, bracing for the big, ominous Shakespeare test at the end of the week.  She keeps it to herself, however, rather than sharing the situation with Lorelai.

Even after watching it again, I still barely understand her reasoning.  It strikes me as mostly set up for the meet cute between mom and teacher.

Meanwhile, at the Independence Inn, a food critic has reviewed Sookie’s cooking and it’s “a rave,” as Lorelai puts it, and it’s no exaggeration.  The review does however, mildly underrates one aspect of his meal (and it is mild because he loved the food otherwise), and Sookie becomes determined to clear her record.  The most bizarre thing, is that this plotline gets dropped entirely after Sookie tracks the critic down to his house and presents him the same dish with a different wine.  We never hear about that event ever again and it’s unfortunate because, while it’s more obsessive behavior from Sookie, you can also see why she takes so much pride in her cooking.  Not only is her food ridiculously good – enough for a glowing review and an overall reputation within the tri-county area of being stupendous – but her food is connected to some pretty amazing memories.  Anyone who takes that kind of pride in their work is commendable and it’s part of why I love Sookie.  It’s the artist streak in all of us that she doesn’t keep hidden and it’s fantastic.

Obsession is the theme of the episode, though, as Rory spends the rest of the week killing herself studying, both with and without Lorelai’s help.  The two fall asleep Thursday night and miss their morning alarms.  Rory dashes to school – slowed down briefly when a deer slams into Lorelai’s jeep – and once she finally gets to class, she is barred from taking the test.  Perhaps it’s just because I went to public school, but I don’t understand why Rory couldn’t have still at least started to take the test, and simply not had any additional time. She’s been on time every other day of the semester, yeah?  It’s not like tardiness was common from her.

Do not pass GO.  Do not collect your ‘A.’  Go directly to the Headmaster’s Office.

It doesn’t matter, though.  During Rory’s desperate pleas to Mr. Medina, Paris whispers a snide, “loser,” to her classmates…and Rory snaps.  She whirls and rails against Paris, who shrinks back into her seat.  All I can say about that is: yes, yes, YES, Rory.  I remember watching that episode for the first time, being completely taken aback by Rory’s gumption.  We all wanted such a blow up and we actually got it!  Rory is so mild-mannered, that it was really rewarding to see her bust loose a little; especially when everything she says is within reason, even if loud.  And Paris is surprised, too.  She doesn’t seethe or respond.  She can’t even look at Rory.  Love it.

She stops to give Tristan a proper yell on the way out, too, and it is glorious.  Eat it, dirtbag.

Summoned to Chilton, Lorelai assures a deflated Rory that everything will be taken care of.  However, the meeting that ensues between parent, teacher and headmaster quickly dissolves into Lorelai’s very own breakdown, ending in a pompous nope, from Headmaster “Il Duce” Charleston while holding open the door to his office.

“You nurture horrible kids who treat each other like mortal enemies.  You set impossible standards…and you take a great kid like Rory and you tear her apart!”

I’m very impressed by the two rants, even more so in the re-watch.  Their differences are fascinating.  We see this type of variance in personality portrayed more than once in this show (especially in season four episode Let the Games Begin, which are some of my favorite scenes in the entire series), but I sincerely appreciate it here, four episodes in.  Both girls “throw fits” as Headmaster Charleston observes, but not only are the breakdowns beautifully performed by the two actresses, the writing, too, is razor-sharp.  Rory maintains a normal, respectable volume towards Mr. Medina – even while outright begging to take the test – only yelling once she rounds on Paris.  Lorelai, on the other hand, yells at both Medina AND Charleston.

I would go so far as to say it is some of the best characterization writing from these early episodes.  It’s a touch on the over-dramatic side, as is much of the rest of the first (and even second) season, but the situation warrants it, between build-up and payoff.  I really enjoy watching the study session.  It’s scenes like that that establish the warmth and familiarity of their household and relationship.  It felt very real to me; I can recall similar study sessions between my mom and I (even if it was over math and biology, rather than Shakespeare) and it does an excellent job of continuing the mood from the opening scene.  The mad-dash to school is a bit over-the-top, Rory’s stopping to get out of the car to search for the deer is completely absurd, but two rants, I think, are entirely worth it.  Lorelai can get desperate for Rory to succeed sometimes, but you can also see the earnestness in both her and Rory’s actions. 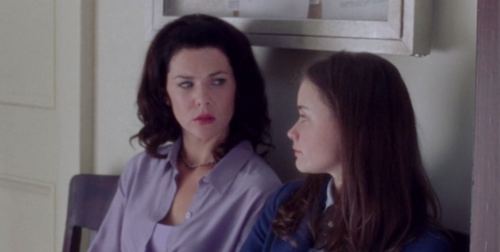 Lorelai acknowledges at the end of the episode that the fixation on the studying, overworking themselves and the drive to go to Harvard might have started from her own desires, pushed onto Rory.  She gives Rory the freedom to make her own decisions and do what she wants and I believe her.  Maybe I’m biased in Lorelai’s favor, and I admit that, but I think the writing backs me up.  She genuinely wants what’s best for her daughter; for her to be healthy, happy and, more than anything, her own self.  Considering what Lorelai has been through to get that on her own, it seems to me that she means it.  And this is a consistency in her character that lasts throughout all seven – yes, seven – seasons.

The episode concludes with a message on their answering machine from Mr. Max Medina, indicating very obvious foreshadowing for what is to come in subsequent episodes.  And some great acting on Lauren Graham’s part.

One thought on “Gilmore Girls: The Deer Hunters”