Cue the musical theme from The Good, The Bad and The Ugly

More time with the Stars Hollow bunch, a cat’s funeral and the preludes to two new romantic subplots.

If the title is not obvious enough, the early part of the episode indicates that the neighbor’s cat, Cinnamon, is under the weather.  There’s not a lot of emphasis on Cinnamon herself, but we are given some pretty darling moments between Babette (Sally Struthers) and Morey (Ted Rooney).

Dean catches up with Rory on the bus and she continues to act uncomfortable and awkward – more so, in fact.  Dean, on the other hand, starts showing more normal behavior and acting more like a normal person, in particular when he joins her on her morning bus ride and asks her about her commute.

When she gets to school, ta-da!  Time for the Chilton Bake Sale; and it’s Sookie to the rescue!  This was the first time I wondered about the realism of how much she’s able to do.  Not her skill with the materials, but where the materials come from.  Is she a Rockefeller?  Surely the volume of food she produces has got to cost…a lot, no?  Not that we have much time to wonder about it.  Mr. Medina soon makes another appearance and, after a quick, “I stand by my actions last week” and an additionally hasty, “but I totes still think Rory is awesome,” he asks her out.

All I can think is that Lorelai’s pheromone levels must be on overdrive when she steps foot on the Chilton campus.  I will say that Scott Cohen does a much better job at the swift ask-out than Chilton Dad a few episodes ago and while I, by no means, ship this pairing, I cannot deny that Cohen and Graham have some pretty fantastic chemistry.  Even though the objective set up is more than a little brisk, they pull it off and I enjoy this scene and pretty much all the scenes between them. 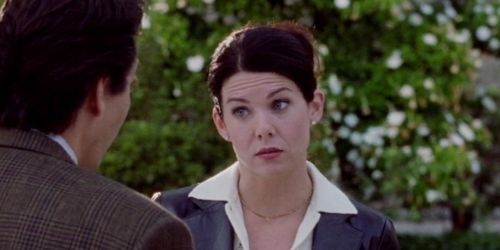 Another moment with Babette and Morey brings us another mention of Al’s Pancake World, and not in good context, followed by another awkward scene between Rory and Dean (from which she retreats almost immediately), Sean Gunn officially makes his first appearance as Kirk – but his personality is still undefined.

I am shocked – SHOCKED – to find you drinking coffee in here.

Lorelai and Max meet at the coffee shop for their “non-date” and I hate admitting that I like this scene as much as I do.  It’s very well written; and I think this relationship was.  I love how they’re able to zing one another.  The back and forth rapport they share is both scripted and acted seamlessly.  I get the feeling that these scenes between Lorelai and Max were like dessert for Amy Sherman-Palladino and the entire writing team.  Knowing that some of the first steps to creating the series were somewhat rushed and improvised, this arc and this dynamic may have been one of the first that was planned and that they were actually looking forward to.

Sookie and Lorelai have lunch at Luke’s and debate the pros and cons of dating Max.  During the conversation, Sookie strays behind Luke’s counter and Luke himself appears in a tirade.  These two aren’t exactly adversaries.  Rory rushes in, however, with news that Cinnamon has, as the title indicates, passed away at the human equivalent of 260 years old.  The whole town shows up to support Babette and Morey in a – wait for it – Wake for Cinnamon.  This includes Luke and Sookie, both with armloads of food.  Sookie’s immediate breakdown of how to set up the room for food makes me want to applaud every time I watch it.  And as much as I love Luke, his subsequent, “dig in!” has and probably will always bother me.

In the hubbub, Lorelai forgets that Max is due on her doorstep that evening, and it’s Rory who spots her teacher first.  Lorelai rushes over and spends an extensive amount of energy convincing Max that “the neighbors’ cat died,” is not an excuse to get out of the date and that she does want to go out with him.

Lorelai and Babette share scenes in the kitchen which probably looked ridiculous on paper, but Sally Struthers plays it with such sincerity that I never watch it and not get completely caught up.  In spite of the multiple mentions of “you’re having a funeral for a cat?” throughout the episode, it’s ultimately taken very seriously by the characters and believably so.  I also very much appreciate the brief interchange between them, on the subject of being wanted.

BABETTE: I never thought a man would ever even want me.
LORELAI: I know the feeling.
BABETTE: Oh, please, with that ass? Gimme a break.
LORELAI: I mean want me for more than my ass.  Me for me. The whole package. Annoying neuroses and all.

The exchange is brief, but poignant.  They don’t belabor the point and they don’t invalidate either perspective, which I applaud.

Outside in the garden, Dean finds Rory and apologizes for “bugging her lately,” and that he is going to leave her alone because she’s “obviously not interested.”  I like that he doesn’t sound resentful or condescending here, only disappointed; and that makes sense.  I had seen other episodes that followed, so I already knew what was to come, but I would not be surprised if an unknowing audience would have been thinking along similar lines as Dean. Just before he walks away, however, Rory calls after him to say that she is interested … then promptly flees.  In a show that thrives on overwhelming amounts of dialogue, this sparse interaction clearly conveys Rory’s genuine interest in Dean, but also her lack of experience with such feelings and that she doesn’t entirely know what she’s doing.  She doesn’t want Dean to go away, though, and it’s sweet and I appreciate it.

Lorelai later explains to Rory the situation with Max.  Rory expresses sensible trepidation, to which Lorelai makes a pretty reasonable case, including an up-front “I won’t see him if you don’t want me to.”   Rory refuses to answer – deliberately keeping Lorelai on edge – until the final moments of the episode.   I like these moments because Rory shows her own version of traits usually exhibited by her mother.  Rory doesn’t stretch out the anticipation for more than a few minutes, making a seemingly offhanded comment about an upcoming assignment and the episode concludes with smiles all around.